There’s too much in my cellar.   I’m finding, like many a cellar owner before me, that some of my cherished wines are over the hill.  I keep making a resolution to drink up all suspect bottles a.s.a.p., but then the next LCBO release comes out and there are six or eight that I would like to try.  And because my favourites never seem to last very long on the shelves, I need to pop those corks fairly expeditiously – if there is something that I just have to have for my cellar, I must get back to the store while there is still a supply remaining.  Now you begin to see the problem.  Since this process repeats itself every two weeks, there isn’t much time to drink the old stuff, and of course I may even exacerbate the problem by grabbing a half dozen Barolo that I loved out of the last release, thereby restocking the cellar. 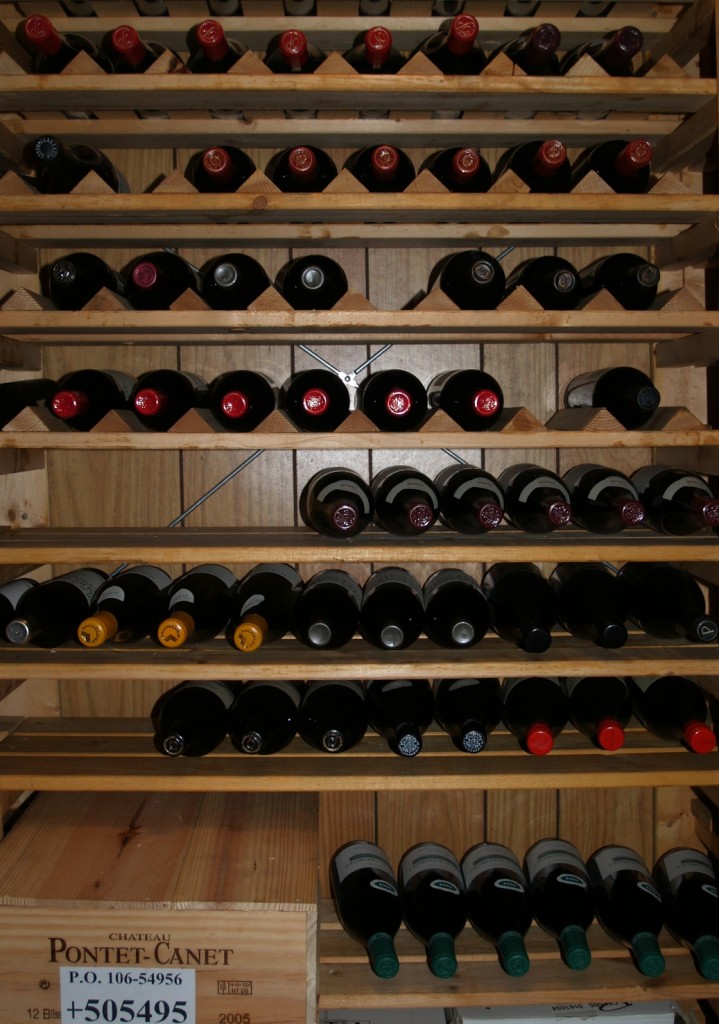 Bottles aging in the cellar but begging to be enjoyed

Anyway, that’s all prologue to my main topic.  As I sniff and swirl wines that I laid down a decade or so previously, I find some gems and some dross, but the results don’t seem to correlate particularly well with expectations for aging potential.  So what’s going on?

It would be easy to blame my cellar, since it is not a $50,000 climate controlled work of art.  It’s just a small room in the corner of my basement with passive climate control; i.e. the ceiling, interior walls, and upper exterior walls are insulated, but the floor and lower exterior walls are not.  The result is a gentle and steady transition from 19-20°C in midsummer to 13-14°C in midwinter.  The average, then is 16-17°C, not ideal, but not bad.  I would expect slightly faster aging than in a cellar constantly at 13°C, but that’s about all.  Of course it’s dark and there isn’t much vibration – our house sits on bedrock.  In any case, I regularly uncork beautifully aged examples – if the storage conditions were very bad then I would expect most of them to be over the hill early.  So what gives?

One possibility is that some wines are not meant for long aging in spite of traditionally falling into such a category.  Even classified Bordeaux can lull you into a false sense of security.  Here vintage is all important.  I recently opened a 1995 Ch. Calon-Ségur that was fully mature and drinking beautifully – 1995 was a good year for aging.  On the other hand, my 1994 Ch. Pichon Longueville Comtesse de Lalande has never really come into its own.  The wine was as well reviewed as the Calon-Ségur at the time of release, and Pichon-Lalande did a great job in 1994, but that was not a great year.  In the long run, no amount of good work in the cellar and the vineyard can make up for that initial handicap.

Terroir makes a big difference as well.  Burgundy, both red and white, is well regarded for its longevity, but when you take Chardonnay or Pinot Noir away from home, they don’t last as long.  Even good Chardonnay from California tends to fade fairly quickly, while pricey Ontario Pinot Noir is losing it after three or four years.  In both these cases, however, there are signs of improvement.  In particular in Ontario vines are getting older and local techniques are adapting to local conditions.  You still have to keep a close eye on Pinot from the newer Prince Edward County DVA as a lot of it isn’t really cellar-worthy yet (although I keep trying!)  On the other hand, examples from Niagara’s Le Clos Jordanne seem to be just coming into their own after several years in the cellar.  Even with the poster child for lengthy aging, Cabernet Sauvignon, terroir makes a difference, but in a more subtle way.  There is no longer much doubt, for example, that Napa Valley Cab can age as long as a good Médoc, but in a rather different way.  While Bordeaux evolves in bottle into something that (we hope) is completely different from and transcends the young wine, the Napa stuff can maintain its fruity elegance for decades, but always resembles its younger self.  Even a ham-fisted amateur winemaker like me can make age-worthy wine with good Napa starting material.  A recent bottle of my 1996 was fresh and fruity – maybe I should not have stopped making the stuff…

A number of factors affect aging of wine (for more information, look here):  the grape variety, the terroir (here I include local viticultural and winemaking practices), the vintage, and the cellar conditions.  Each has an influence on the wine’s chemical constituents, which is what really counts in the end.  Higher concentrations of acids, sugars, and phenols (including tannins) all increase longevity.  The hundreds of chemical compounds in wine, especially the aromatics (mostly esters, terpenes, and mercaptans) as well as phenols, affect flavour evolution as their concentrations increase or decrease with time.  The bottle stopper also affects the aging process, but I’m not uncorking that can of worms today – you can read more about the latest on the relationship between closures and “reduction” here.

So how does this all relate to my cellar experiences?  I think there are at least two lessons to be learned.  The first is to check on your keepers fairly often and then drink them as soon as they seem ready.  The second lesson is to drink sooner rather than later.  Wines are generally more enjoyable when they are a couple of years young rather than a couple of years too old.  If you want to keep a bottle or two out of a case for posterity or to see how a particular wine fades into old age, fine, but if, like me, you love about wine because you love how it enhances life, then drink it, don’t collect it.