One of the most significant trends in the winescape over the past few years has been the movement to “natural” wines.  Since two interesting books on the subject have published within the past year or so, I thought it was worth taking a closer look at the phenomenon and even attempting to understand what it’s all about. 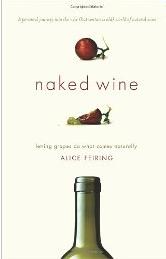 The two books, by the way, are “Naked Wine” by Alice Feiring, and “Authentic Wine”, by Jamie Goode and Sam Harrop. 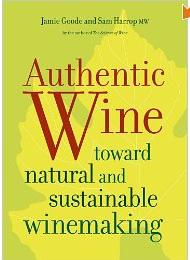 Right away you can see one of the problems – nobody agrees on a common name for the style, partly because no one seems to be able to come up with a universally accepted definition.  It’s one of those wine terms like “terroir” that everyone understands but no one can clearly define.  But what the hell – here goes…

It’s easier to say what natural wine is not than what it is.  In general, human input is limited to the minimum necessary to obtain the desired fermented grape juice.  It is not over-ripened, over-extracted, or over-manipulated.  None of the 60+ additives permitted (e.g. in the U.S.) is used except for some sulphur, but even that is controversial – more on that subject later.  These precepts apply both in the vineyard and in the winery, so natural wine is not equivalent to organic wine, although organic or biodynamic principles are generally applied.  Naturally occurring yeasts create the alcohol.  In a nutshell the modus operandi is “nothing added, nothing taken away.”  Now, of course, some input from the winemaker is required because if you simply leave a bucket of grapes out in the barn, you will eventually end up with very expensive vinegar.  There is crushing, possibly destemming, pressing, selection of fermentation tank, temperature control, pigeage or batonnage or not (usually not), allowance or suppression of malolactic fermentation, barrel aging, filtering (usually avoided), fining, and use of sulphur.  Now you see the problem with the term “natural” and why the search is on for a better handle.  In a way, this movement returns to the more traditional practices of the past (hence my title for this post) but employs ultra clean techniques (not always so traditional!)

There is a lot of upside to natural wines.  Because manipulation is minimized, they tend to reflect the terroir much more accurately than “modern” wine making.  Over-ripeness, over-extraction, overuse of new oak, and a lot of other “overs” are avoided so that these wines are typically more food friendly.  The avoidance of pesticides, other vineyard treatments, and additives in the winery is appealing to adherents of the local/organic/slow food movements.  On the other hand, casual wine drinkers are often put off by the idiosyncratic, even “funky” flavours that can develop.  Most of all, the wines tend to be fragile, not handling temperature variation or travel well.  This characteristic arises from the minimalist use of sulphur.

Hard core natural wine producers use no sulphur at all, while others add a little at bottling to make the wine more robust for travel and storage.  As a reality check, it should be noted that the Demeter organization (the most recognized authority for biodynamic practices) permits up to 110 ppm for red wines and 140 for white wines, not a lot below the EU standards of 160 and 210 respectively.  Now the majority of natural wine producers are small scale farmers whose product does not travel far from its place of origin.  Thus there is far less stress placed on a somewhat unstable chemical soup.  Therein lies the main reason why so many wine lovers rhapsodize about the authentic terror-driven wine they tasted with the winemaker on site, while critics further afield are often much less enthusiastic as they focus on the major faults that they find.  In fact, Robert Parker famously called natural wine “one of the major scams being foisted on wine consumers.”  (Note that no one provides a reference for that quote – I haven’t been able to turn it up with a quick scan through my back issues of the Wine Advocate.  Does anyone out there know?)  On the other hand, one of Parker’s contributing critics, Neal Martin, states that he has “adored, indeed occasionally worshipped the wine of López de Heredia”, one of the most famous traditional, and in fact natural, wine producers in the world.  And so the controversy continues – for a fairly recent take on the issue, have a look at Eric Asimov’s January 2012 article in his New York Times column “The Pour”.

So how do we get a chance to try natural wines and form our own opinion without needing to travel to the source every time?  Well, it’s not easy in Ontario where the LCBO emphasizes big fruit-driven, often highly-manipulated wines.  To provide some contrast, a couple of months ago I researched through books, magazines, and websites and made a long list of some 1667 wines from 361 natural wine producers worldwide, with the majority being from France.  I then looked through the on-line listings for both the LCBO (Ontario) and the SAQ (Quebec).  There were 117 of the wines available in the SAQ, and just 46 in the LCBO (shame!)  However, at least there are some possibilities.  Therefore I recently gathered with some friends to taste a few of them and the results gave me reason to be optimistic.

Some of the earliest natural wine producers came out of Beaujolais, so that’s where we started.  From time to time the LCBO carries wines from Terres Dorrées, one of the most respected producers in Beaujolais.  We had a 2010 Morgon and compared it with another 2010 Morgon from Jean-Ernest Descombes, who operates under the Duboeuf umbrella and therefore employs a more modern style.  The tasters were divided as some preferred the spicy fruit-forward nature of the Descombes, while the majority voted for the Terres Dorrées, which was more complex, slightly earthy, and exhibited better balance.  Everyone agreed that it was the better bet as a food wine.

A much more dramatic contrast was provided by a pair of 2005 Riojas.  One was the Viña Cubillo from the aforementioned R. Lopez de Heredia while the other was a Maetierra Dominum Quatro Pagos.  Maetierra Dominum is an ultra-modern organic winery that employs Michel Rolland as a consultant, so it was expected to provide a nice contrast to the ultra-traditional Lopez de Heredia.  In fact, the contrast was striking, right from the colour.  The Maetierra was black, while the Heredia was a translucent garnet.  There was lots of oak, vanilla, and fruit in the Maetierra while the Heredia was complex, slightly oxidized, medium bodied, and dense with interest, not pigments.  Tasters were split on which they liked best, but again the votes went to the Heredia when potential food pairing was the main criterion.

I should also recommend another good natural wine that the LCBO has stocked in the past – Montirius Le Clos Vacqueras.  There was still some available as of the date of this post, so pick up a bottle and compare with one of the more conventionally produced Vacqueyras.  The bottom line is:  if you want to learn about natural/authentic/traditional/naked wine, the best way is the usual way – try them and make up your own mind.