It’s time to revisit “The County” since I last posted on the subject.  I was unable to get around much last summer for personal reasons, so I have two years to catch up on.  During the past week I visited a number of the newer wineries located all over the County, ranging from one that had been operating for four years or so, but which I had not yet visited, to a winery that only opened the day before I arrived. 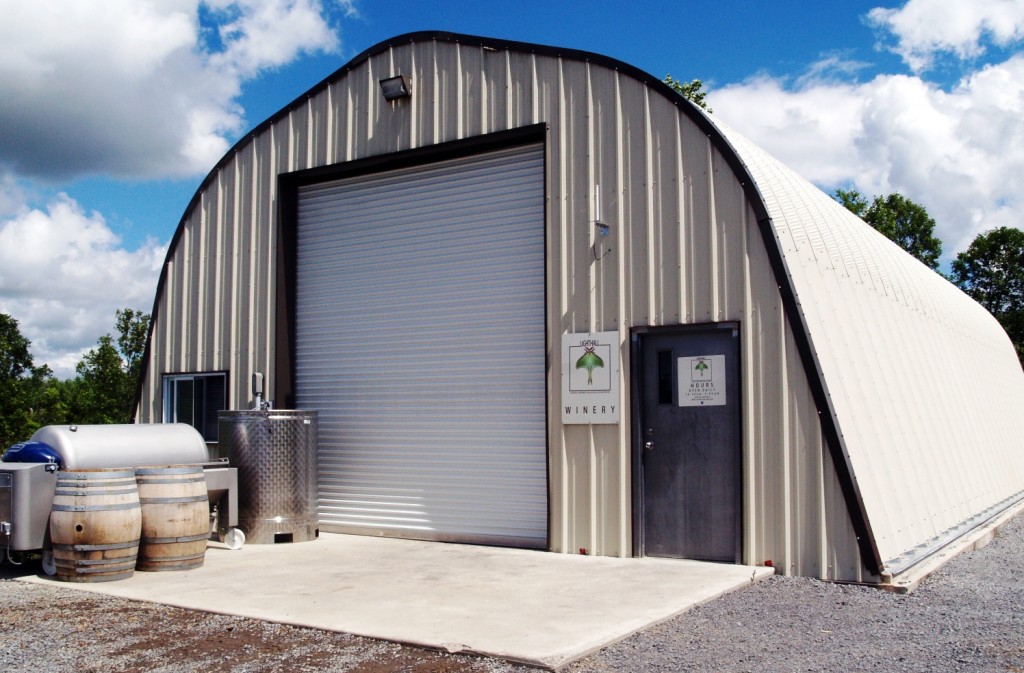 Lighthall Vineyards has a long history as it boasts some of the oldest vines in the county, planted by Peter and Alice Mennacher in 2000.  For many years these quality grapes (notably the Chardonnay) were supplied to the likes of Closson Chase and Huff Estates, but after Glenn Symons purchased it in 2008 he opened the winery, with 2009 being the first vintage for sale.  Glenn uses a concrete fermentation tank for his Pinot Noir and all oak aging is carried out exclusively in French oak.  I’m familiar with the quality of 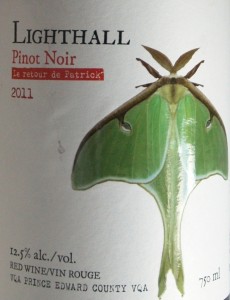 the Chardonnay, both from the days it was vinified at Huff Estates and more recently, so I was looking forward to the tasting.  Unfortunately, the examples of the 2009 and 2011 that I was offered had been opened for a while and the level had reached the heel of the bottle, so I hesitated to make a judgment.  Please, winery pourers, never offer wine from a bottle that was opened the day before!  The Gewürztraminer had a lovely perfume, but faded a bit in the mouth – it would, however, make a very nice and refreshing summer wine.  The star that day was the Pinot Noir, which exhibited that classic County mineral backbone along with delicate fruit. 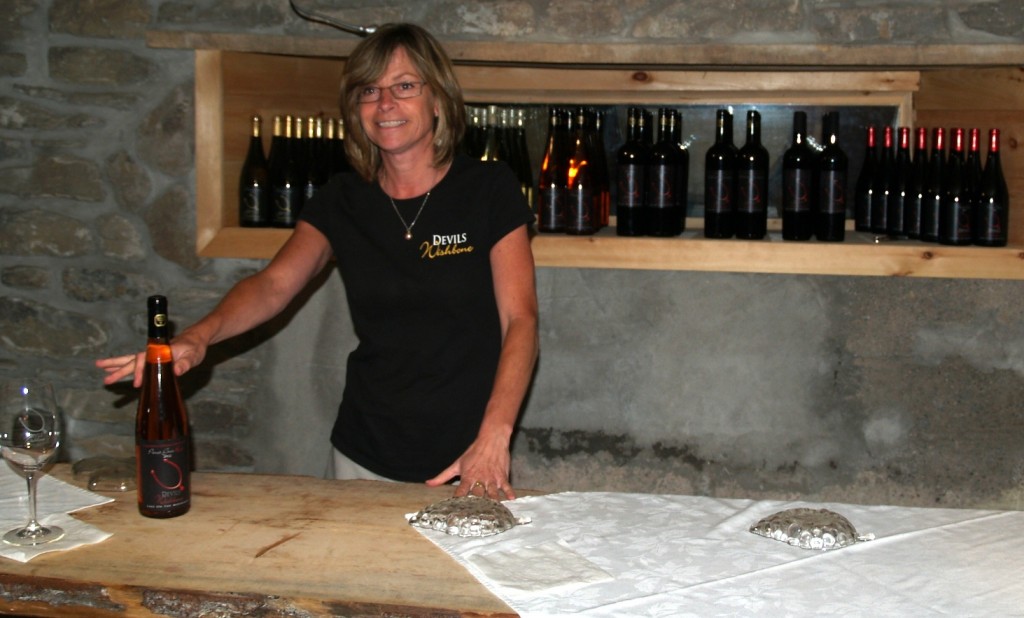 Another winery that has been open for a couple of years is the Devil’s Wishbone, located east of the Lake on the Mountain.  Like Lighthall, they got the business up and running by selling grapes to wineries and they continue to do so, although after 2013 the vineyard will supply the estate only.  In their case it had been Stanners that benefitted from the Devil’s Pinot Noir and 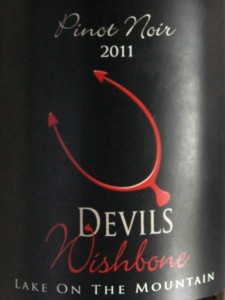 Cabernet Franc.  The Franc was sold out when I visited, but there was Pinot Noir and two variations on Pinot Gris to enjoy.  The first is called Pinot Grigio and is appropriately made in a minerally County style, while the other is vinified from grapes that were left on the deep pink Pinot Gris skins for a day or so and had therefore picked up enough colour to make a nice, slightly sweet rosé, perfect for a summer patio.  The Pinot Noir is particularly recommended as it has very good complexity for relatively young vines.  It’s also a pleasant visit to the winery as owner Paul Gallagher has maintained the ambience of the nineteenth century barn, including the byre where the tasting room is located. 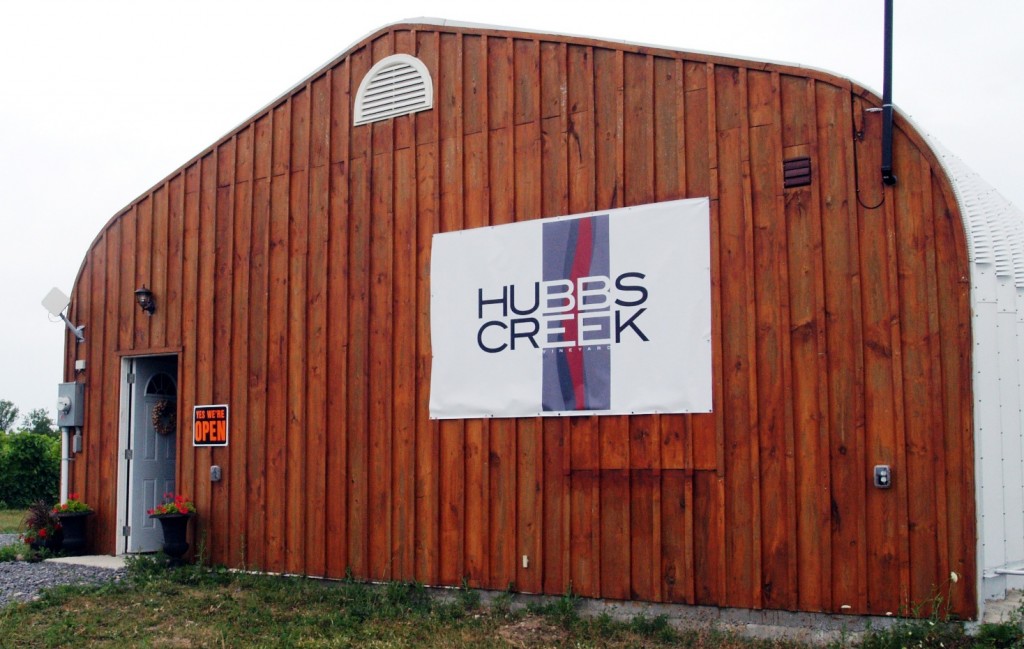 Hubbs Creek in the Hillier area has also been growing grapes for years; in fact their first high density Pinot Noir vines were planted in 2002, so the Calvieri brothers (John and Joseph, whose family hails originally from Calabria) have waited a long time before starting their winery.  Their first vintage was 2009, but only with the 2010 have they been able to sell much at retail.  Their Pinot Noir is classic County, showing real finesse with a solid backbone of acidity balanced by lovely fruit.  They also have Pinot Gris and Chardonnay.  This is definitely a winery to keep an eye on for the future. 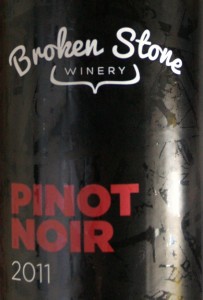 Also in the Hillier area is Broken Stone, where the previous owner planted the first vines in 2008, just before selling to the present owners, Tim and Micheline Kuepfer.  Tim is the winemaker while Micheline runs the tasting room.  They have about 2 acres of vines, comprising Pinot Noir, Pinot Gris, and Chardonnay, but only the Pinot Noir is available for purchase so far.  I tasted a vertical of 2010, 2011, and 2012.  The 2012 is already released because the owners are aiming at value wines, so they (oak) chip their wine, obviating the necessity for long aging in barrel.  At this point the butterscotch oak nose is overwhelming; some time will be needed before the flavours become properly integrated.  The 2010 was a also slightly unbalanced with notable tobacco aromas dominating.  The 2011, however, exhibited very good PEC character and acid/fruit balance – it was easily my preferred vintage and definitely a smart buy. 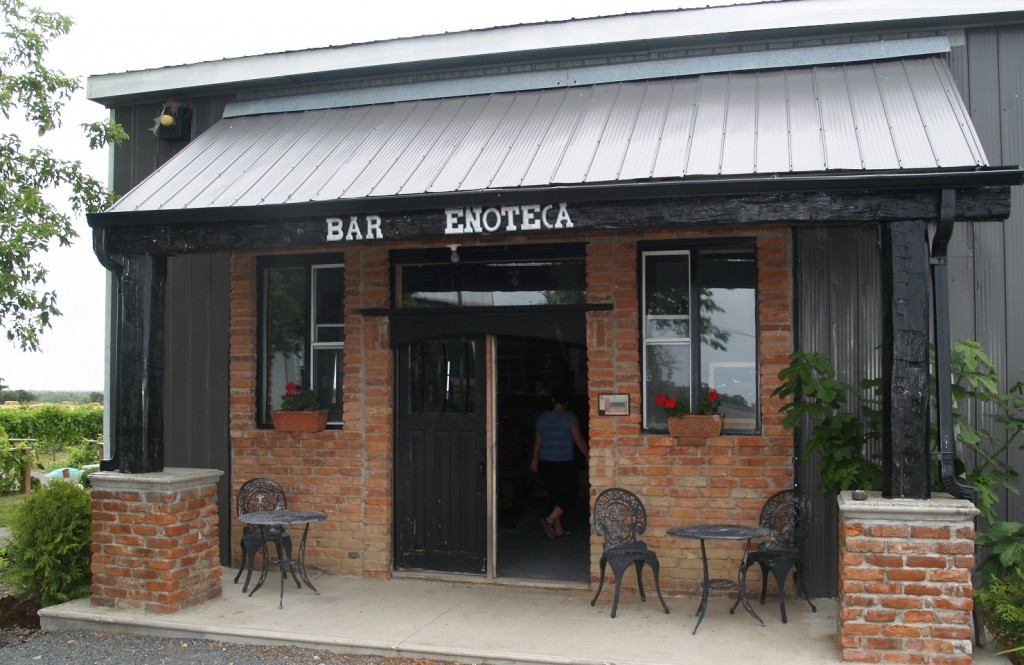 Tasting Bar at TerraCello Winery, just up the road from Huff Estates 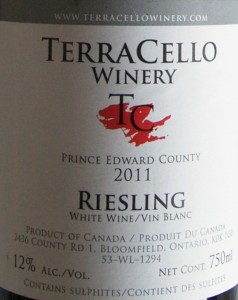 Certainly the newest winery that I visited was TerraCello – in fact it only opened the day before I showed up!  Like the Calvieris at Hubbs Creek, the owners Anthony (“call me Antonio”) and Daniela Auciello are proud of their Italian heritage – in their case their families came originally from Puglia, the heel rather than the toe of the boot.  The Pinot Noir 2010, although three years old, still had a newly vinified nose, perhaps because winemaker Antonio uses no oak at all.  The Riesling was the most promising with a lovely floral nose followed by a steely backbone, arising from that ubiquitous PEC acidity.  The entire winery, as well as the outdoor pizza oven and the nascent art gallery, were all built by Antonio.  The picture below shows the tasting bar. 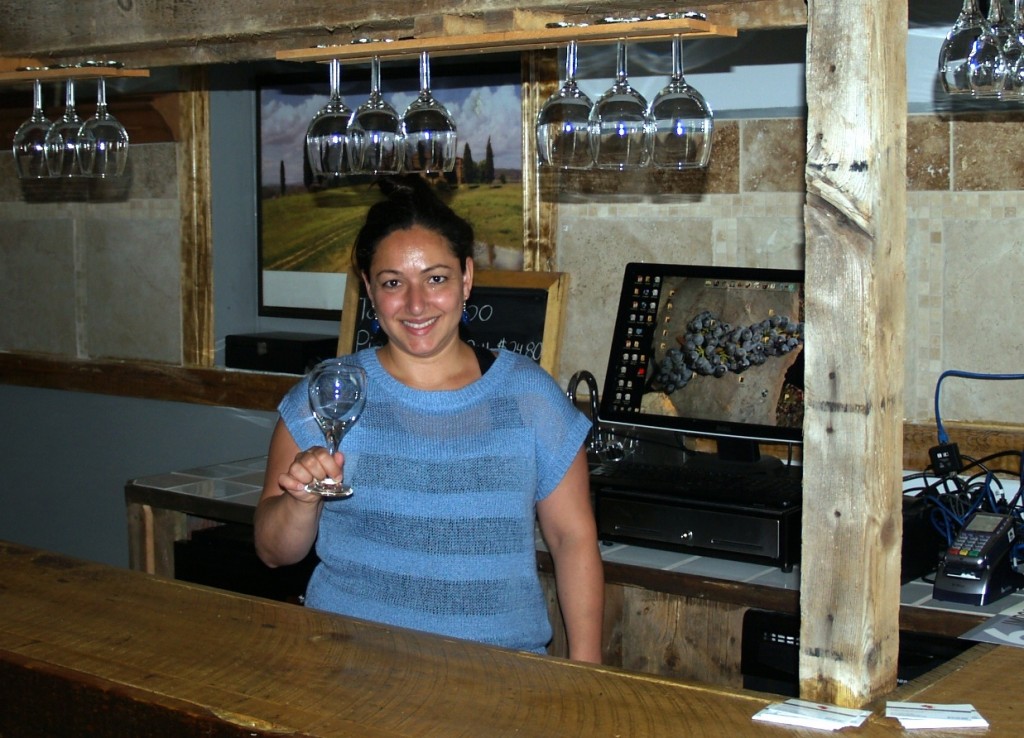 A couple of the newer wineries have come and gone (although in one case only temporarily).  I can remember not too long ago enjoying the fine Cabernet Franc from Fieldstone Winery, vinified at Rosehall Run.  However, with the unfortunate death of owner and pioneer County grape grower Dick Singer in 2010, Fieldstone no longer operates as an independent winery.  Management of the vineyard has been taken over by Norman Hardie.  These vines will broaden the Norm Hardie portfolio with Cab Franc and Syrah, as welll as providing an additional source of Pinot Noir, Pinot Gris, and Chardonnay.

On the 8th Winery opened in late 2011, but with the recent serious illness of one of the owners (who sold up to his partner), the business has closed to the public this year and is reorganizing before reopening in 2014.

If you haven’t been to the County for two or three years, more has changed than just the wine scene.  Some well known restaurants are gone and others have arisen to take their place.  After Michael Potters closed Harvest at the end of 2010 he signed on as chef at the restaurant of Angeline’s Inn in Bloomfield.  Haute cuisine only lasted a year at Angeline’s before Michael moved on to the position of Head Chef at Hockley Valley Resort in the Caledon area.  At that point Angeline’s closed its dining room, but this year a restaurant has reemerged there, called The Hubb.   Also closed for almost two summers has been the Devonshire Inn and its restaurant in Wellington, as it undergoes extensive renovations – current plans are for a September 2013 reopening under the name Drake Devonshire Inn.  However, that loss in Wellington was balanced by the 2011 opening of Pomodoro, owned by East & Main and serving quality Italian cuisine.  Another interesting place that has come on the scene recently is the Agrarian in Bloomfield.  It offers beautifully cooked small plates or tapas in the rustic dining room, along with a gourmet food and cheese market. 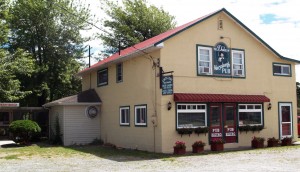 The Duke of Marysburgh pub in Waupoos.

Finally, for a surprise dining experience that’s been around forever, try the Duke of Marysburgh pub in Waupoos, which has been in business for some 20 years.  Owner Vas da Silva may entertain you with live music while his French wife is an accomplished chef who provides quality fare at a fair price indoors or, preferably, in the fully screened patio.