It’s been a couple of years since I last reported on the newest wineries in Prince Edward County (“The County”) and with the continued growth in the number of wine producers , it looks like it’s time once again.  There have been 6 new wineries opening in the past couple of years, one of which (Three Dog Winery) had just opened for business at the time of my last post on the subject, but I didn’t get over there at the time.  It’s in the far northeastern corner of the County (although conveniently accessible from the 401) while four of the other five are in the Hillier region, reinforcing the preeminence of Hiller as the core area for wine production in Prince Edward.  So let’s start there.

Domaine Darius, whose handle reflects one of the middle names of the owner, is located within the eastern reaches of Hiller, next to Sugarbush Vineyards.  All of their grapes are sourced from the County, mainly the estate vineyard.  The Rosé is a blend of Gamay and Auxerrois, made in a traditional way by macerating separately for just one day before pressing off the skins.  The result is medium pink and refreshing in a French style.  Their Chardonnay has more pretentions as it is barrel fermented and then aged for 18 months in a mix of French and Minnesota oak before blending.  Consequently, the usual high acidity found in the County is somewhat balanced by the sweek oaky notes and perfumed nose.  Finally, the red is a blend of Cabernet Franc, Gamay, and Marquette.  Interestingly, the Cab Franc influence takes a back seat to the Gamay, whose spicy fruit is prominent in the nose and mouth, and the Marquette, which provides some characteristic hybrid notes in the finish, although the Cab Franc is probably responsible for the modest tannins. 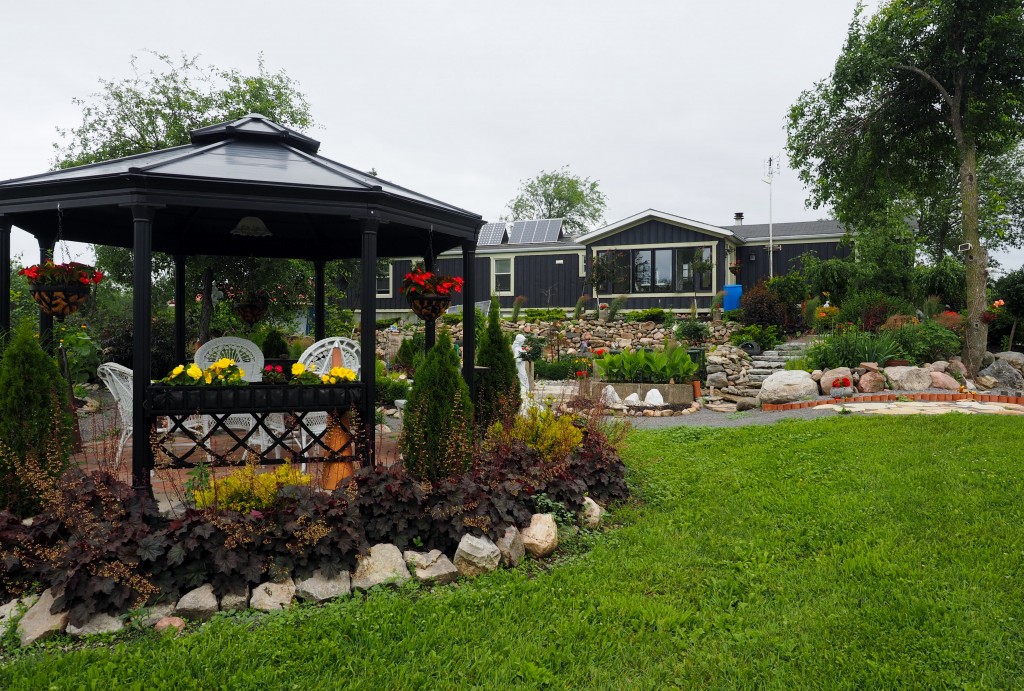 The two new wineries in central Hillier are Trail Estate Winery and Traynor Family VIneyard.  For now, both are focussed on producing wine from Niagara grapes while they wait for their young estate vines to come on line. First up will beTrail Estate, which expects to release its estate Baco Noir before the end of the year.  There is a lot of promise at Trail as the wines on display all exhibit a deft winemaking hand, a light touch that should benefit County fruit.  However, things may turn out quite differently in a year or two since their new winemaker started just last week, and of course the source of fruit will be change.  Time will tell. 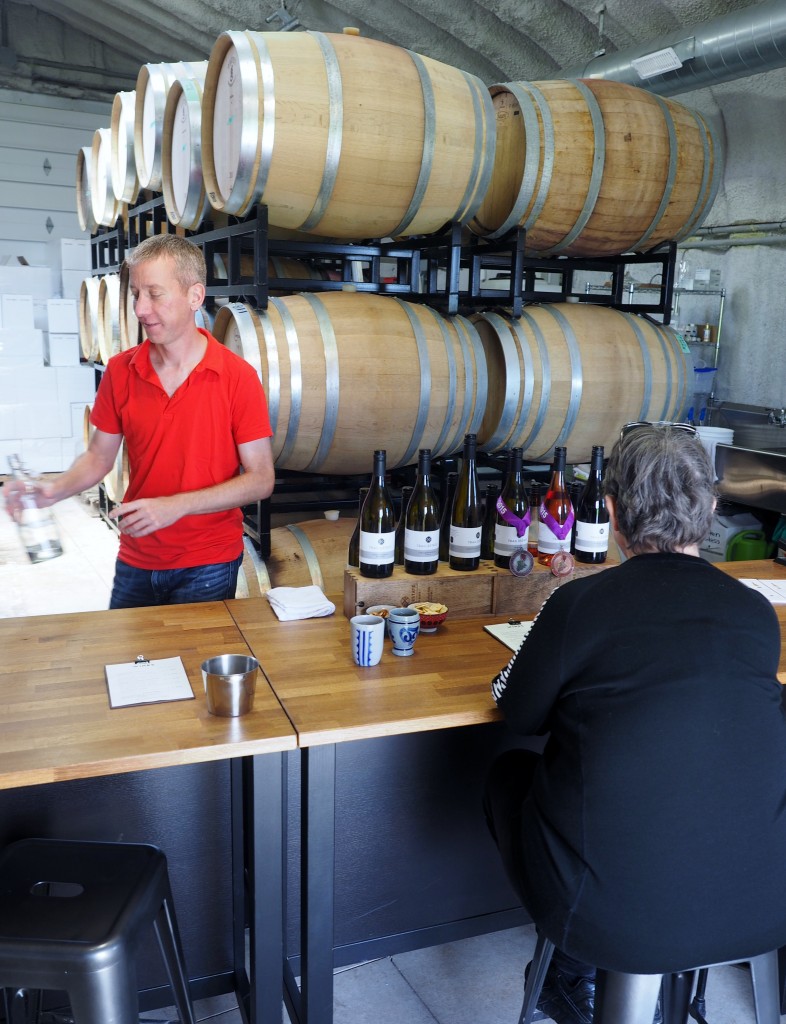 Tasting at Trail Estate.  All the wines on display employ fruit sourced from Niagara, but the first estate wine (Baco Noir) is due to be released this year.

Meanwhile, Mike Traynor is bringing his many years of winemaking experience to the family vineyard, and is also letting the fruit speak for itself with unoaked Chardonnay and Pinot Gris (sourced from Watson’s Vineyard in Niagara).  Like Trail Estate, Traynor’s first estate offering will be hybird based, the 2014 Alta Red, a blend of 60% Frontenac Gris and 40% Marquette.  They are also showing a major concern for the environment, if all the electric charging stations out front are anything to go by! 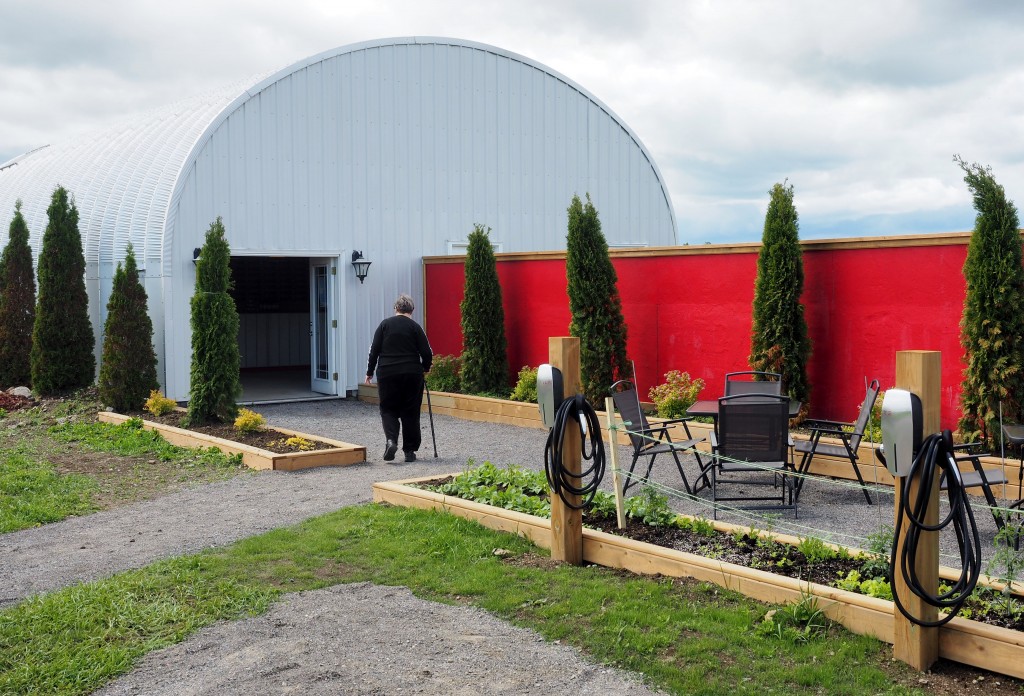 The parking lot at Traynor Family Vineyard is marked by a trio of charging stations for electric cars.

The fourth new winery in the Hillier area is Terra Estate Winery, alone on the north shore of Lake Consecon.  The nearest neighbour winery is Redtail Vineyard in Consecon.  To be completely accurate, Terra Estate is really in Ameliasburgh ward (as is Redtail), but Hillier is literally across the street.  Since I first posted this article I was able to meet one of the Terra Estate co-owners, Alexandra Tam.  The owners live in Toronto but the site is overseen by their vineyard manager Edgar Ramirez, who lives locally, while the wine is made by Emiliano Furlan, who lives in Italy but flies over for the harvest and fermentation.  The first acre of the vineyard was planted with Cabernet Franc in 2007 but since then it has grown to 10 hectares, big enough to justify the recent acquisition of their own bottling machine, shown below. 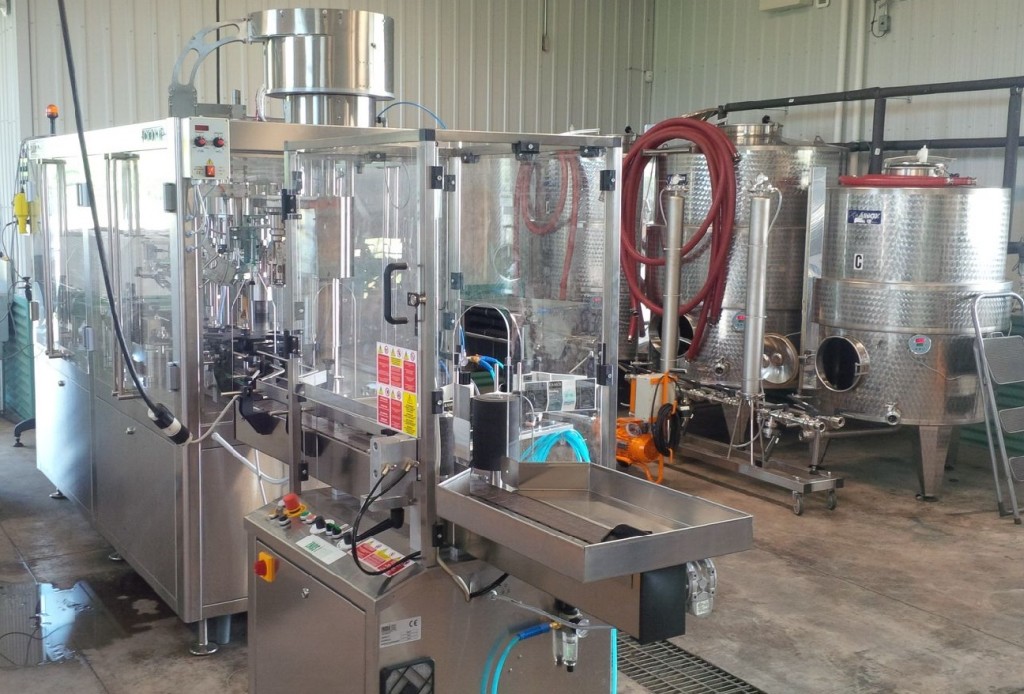 The new bottling line at Terra Estate, inside the winery.

The site is planted with hybrids Frontenac and Vidal, plus vinifera Cabernet Franc, Merlot, Pinot Noir, Riesling, Pinot Gris, Chardonnay, and, interestingly, Viognier.  Only the Cab Franc Reserve, from a selected site, sees any oak.  The newly bottled 2014 Cab Franc and Riesling both exhibited clean fruit.  The Riesling was particularly perfumed, likely due to cold fermentation.  It was tasty and crisp, but not at all mouth-puckering as can happen in the County.  The Cab Franc finished with good length but a bit of greenness that was not detectable earlier.  I suspect that some judicious blending will round it out nicely – I understand they have already tried some experiments with Frontenac.  I tasted a barrel sample of the Cab Franc Reserve, which is just completing its eight months in wood.  The oak had added plenty of spiciness and tannins, muting the fruit somewhat in the process – here time will tell.

Far in the east, near Waupoos, lies Cape VIneyard, whose 2½ hectare vineyard boasts some of the oldest vines in the County, planted by owner and winemaker Michael Lewis in the 1990’s.  That antiquity is not entirely unexpected since Waupoos is the home of some of the oldest vines in the County, as well as the first two wineries:  Waupoos Estates and County Cider.  The fruit in Cape Vineyard’s wines is all County, the vineyards are biodynamic, and the wine is definitely part of the “natural wine” movement.  I was only able to taste the three reds, of which the Loyalist Red was the most enjoyable, made 90% from the intriguing and rarely seen Perle Noir, leavened with 10% Cabernet Franc.  Both the pure Cab Franc and the Pinot Noir were atypical for those varietals; both had noticeable oxidation and perhaps some VA.  This may be the downside of more natural wines as they can be unstable.  Both bottles had been opened the previous day, but that is not usually enough time to account for the characteristics.  The wines I missed out on were the Vidal, the Chardonnay, and the Pinotage Rosé, all sold out.  It will be interesting to see how Pinotage pans out in the County climate… perhaps a good reason for another visit next year.  I’d also like to try a snack from Reggie’s Mediterranean food truck, stationed at the winery. 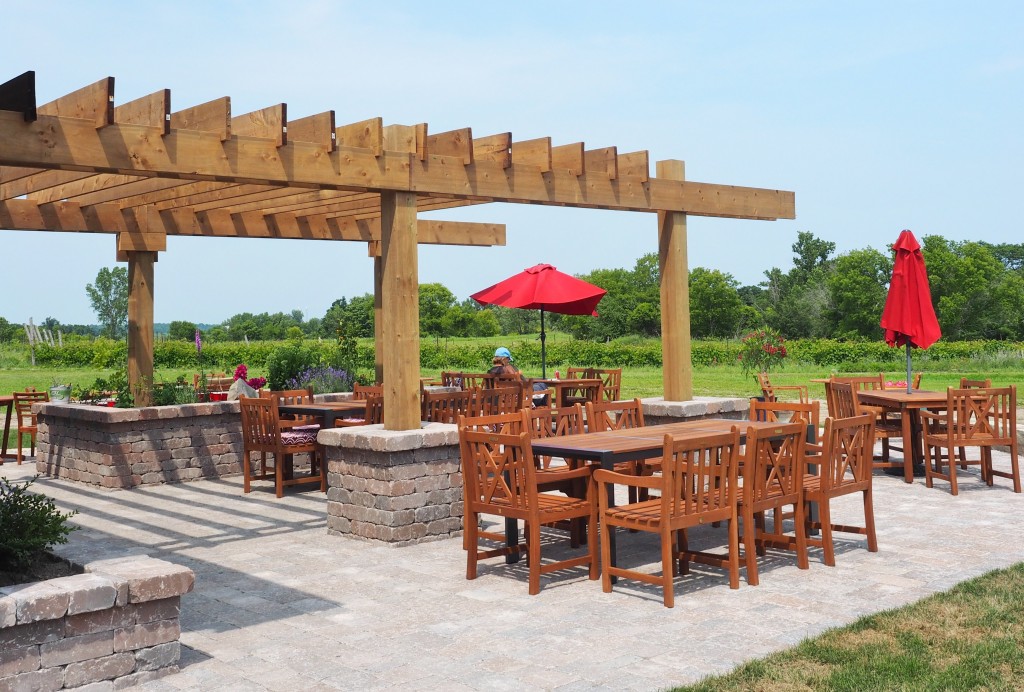 Finally we come back to Three Dog Winery.  When I visited, John was hobbling about the property, recovering from a badly twisted ankle sustained while walking his (three, of course) dogs.   He still happily poured the portfolio.  The business plan here resembles that of Sandbanks more than anyone else in the County, but on a much smaller scale since the production is only 1700 cases per year.  The emphasis is on good value, user-friendly wines that can be enjoyed with food or on their own.  Most of the fruit is estate grown, filled out with some grapes from the Watson Vineyard in Niagara.  The line-up includes a delicate Pinot Grigio and a nice summery rosé made by vinifying Gamay and Vidal separately, then blending.  Lastly, the late harvest “Sweet Sister” (Vidal) would go well with a variety of fatty or spicy dishes. 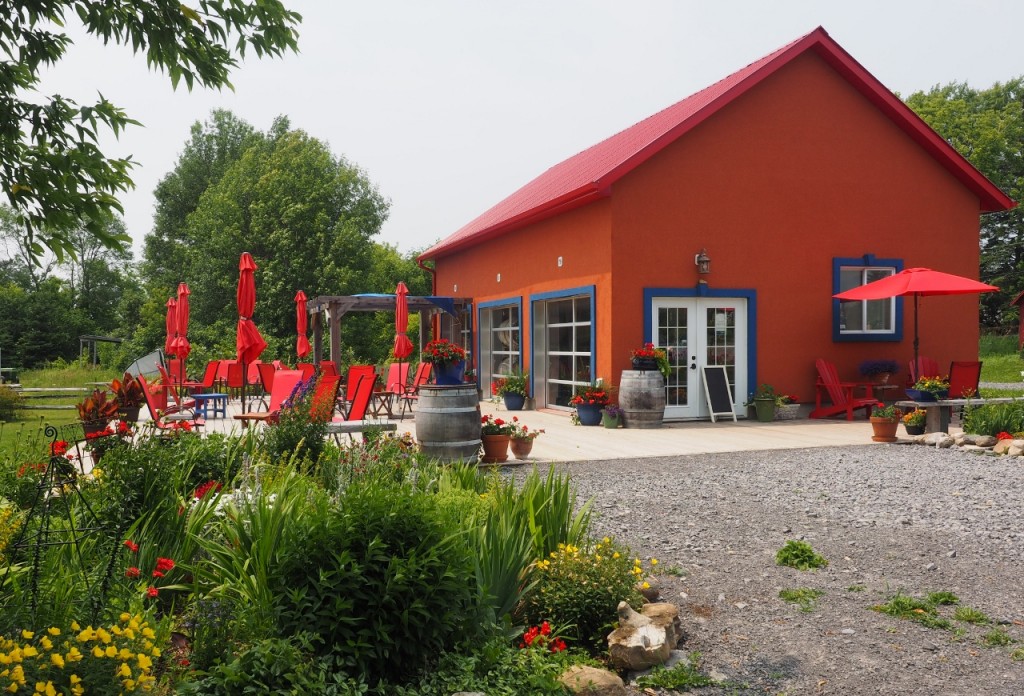 Three Dog Winery and tasting room, all in one.

I had also thought that there was a new “virtual winery” in the County, but the “Nicholas Pearce” label from the eponymous importing agency is simply a rebranding of Glenn Symons’ excellent Lighthall Vineyards Chardonnay for marketing purposes.  It’s certainly a good choice since Lighthall’s old vines, planted by artist Peter Mennacher almost 15 years ago, give the wine some real depth.  Speaking of depth, I should add somewhat paranthetically that when I was travelling around the County I stopped in at an old favourite, the Old Third Winery, specialists in Burgundian Pinot Noir.  For one reason or another I was unable to visit them last year, but it turns out that I didn’t miss anything since Bruno and Jens unfortunately lost 90% of their crop to a late frost in 2012 and weren’t able to make any wine in what was otherwise a glorious vintage.  Anyway, the 2013 is out now and it solidifies their position as one of the best Pinot Noir producers in Ontario.  There is a lovely balance, medium body, and fine structure topped off with nicely ripe tannins that presage a long life ahead of it.  If I were to update my ranking of PEC wineries, The Old Third would definitely fall into the top category.  Stopping in at established wineries like Lighthall and The Old Third confirms how important mature vines and great winemaking are in the County.  That realization provides us with a lot of hope that many of these new wineries will also reach great heights in the future as their vines and winemaking both mature.