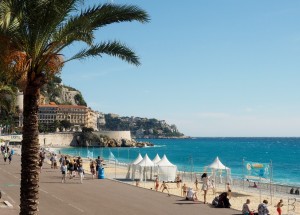 The Promenade des Anglais by the Nice seaside

Earlier this fall I was privileged to spend three weeks dawdling around Provence.  I’ve always loved the pace and joie de vivre of Mediterranean culture, not to mention the climate and the wine.  Provence easily lives up to that reputation.  The traditional province is essentially the south of France east of the Rhône and as far as the Italian border.  It is approximately delineated by the modern départements of Var, Bouches-du-Rhône, Alpes-de-Haute-Provence, Alpes-Maritimes, and Vaucluse.  The only département that I did not spend much time in was Alpes-de-Haute-Provence.  Most of the best wine comes from Var, Bouches-du-Rhône and Vaucluse, but Alpes-Maritimes is a good place to start out from, since its coast is the French Riviera, a.k.a la Côte d’Azur, and one of the two major airports in Provence is in Nice (the other is Marseille).  The brilliant blue sea and fresh fish are certainly attractive, but the wine is generally from elsewhere in Provence and there is that veneer of artificiality that disappears once you get away into the more rural parts of the province. 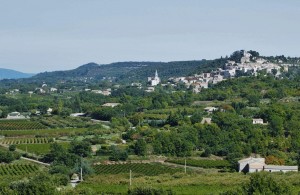 View of the village perche of Bonnieux with the vine covered valley below.

We’ll get to the big name wine areas later, but first it’s pleasant to spend a few days in the Luberon.  This is the largely rural area south of Mont Ventoux, full of vine-covered valleys and hilltop villages (villages perchés in French).  This is Peter Mayle country, especially around the villages of Ménerbes and Bonnieux (where we stayed), so there is one wine in particular that everyone knows – Coin Perdu from the book and subsequent film, A Good Year.  The movie was made at Château la Canorgue, just outside of Bonnieux, and the iconic drive up to the main house is shown here.  Coin Perdu is not available for tasting (but it is for sale!);  however everything else is open. 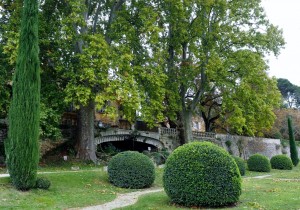 Drive up to Chateau Canorgue, used as the location for the film “A Good Year” starring Russell Crowe and Juliette Binoche

This is an organically managed estate where sulphur use is minimized, so the results can be a little scattered.  The reds are quite tannic but the rosés are lovely, typical of Provence.  The whites exhibit some reduction, likely because of the minimal sulphur use.  While you’re in the area, don’t miss the magnificent Roman bridge, the Pont Julien, only a couple of kilometers down the road.

In the other direction, just past Ménerbes, is one of the best wineries of the Luberon, le Domaine de la Citadelle.  They have three lines of wine.  In ascending order of prestige, they are le Châtaignier, les Artèmes, and le Gouverneur Saint-Aubin.  They are made in all three colours except there is no Gouverneur rosé.  The whites clearly increase in depth and structure through the line-up with the Châtaignier showing off the perfume of Clairette, along with some Grenache and Ugni Blanc.  The addition of Roussanne and Marsanne in the Artèmes provide more body and structure while retaining a floral aroma.  Both these whites are aged in stainless steel, while the Gouverneur has some oak aging – it is built on Viognier, Roussanne, and Marsanne, with some Vermentino, Grenache, and Chardonnay.  Although the Châtaignier rosé is made using the preferred method of short maceration followed by pressing, while the Artèmes uses the more controversial saignée method, the Artèmes does have more depth, perhaps because it is made from older vines.  As with the whites, the lower level reds are aged in stainless steel, although the Artèmes does spend time in old foudres and also experiences some barrel aging.  Both are based on Syrah, Grenache, and Carignan, with some Mourvèdre added to the Artèmes.  That and the wood aging are likely what gives it greater richness.  Finally there is le Gouverneur red.  Here the cépages are 90% Syrah with a touch of Grenache and Mourvèdre.  The wine is barrel aged for one year (as are all wines at la Citadelle) with 15% new oak, resulting in depth and ripe tannins, although it is currently somewhat closed – clearly a vin de garde.  As a bonus, la Citadelle boasts a rather idiosynchratic corkscrew museum where you can pass a pleasant half an hour.  Afterwards, try some lunch at la Maison du Vin et des Truffes in Ménerbes.  The truffled egg dishes are worth the parking hassle. 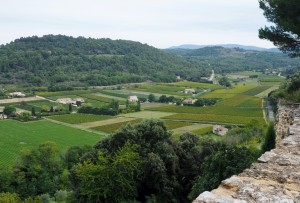 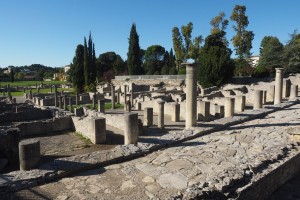 Part of the Roman town in Vaison-la-Romaine

Circling around Mont Ventoux, it takes over an hour to drive from the Luberon to the heart of the Southern Rhône wine region, amid the villages of Vacqueyras, Gigondas, Rasteau, Cairanne, also not far from Châteauneuf-du-Pâpe itself.  A nice place to stay is Les Tilleuls d’Elisée in the small city of Vaison-la-Romaine, where you can visit the magnificent Roman ruins (seen at left) between wine tours. 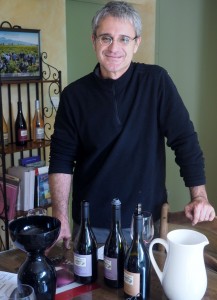 Eric Saurel, owner and vigneron of Montirius, showing off some of his wines

One of my favourite producers, and a must-visit on this trip, is Montirius, located in the Vacqueyras AOC.  They are both biodynamic and a natural wine producer, but not so extreme that they forgo adding sulphur.  Therefore their wines retain the freshness and sense of place that many of us are looking for, but the wines also travel and age well.  The owner/winemaker Eric Saurel, kindly took us through a good range of his wines, including several of the single vineyard bottlings.  His offerings from Gigondas are particularly noteworthy.

A good place to try some Châteauneuf-du-Pâpe is in the eponymous village at the wine shop “The Best Vintage”, where you will be helped out by proprietor Danielle or sister Carole of the Brunet family, owners of Château de la Gardine.  After a tasting, you might want to repair to Le Pistou just up the street for some lunch.  Then remember that you are in the heart of Roman Gaul and visit the magnificent arenas Orange, Arles, and Nîmes, as well as the nearby Pont du Gard.  Much less well known but equally impressive is the Graeco-Roman town of Glanum, just outside Saint-Rémy de Provence. 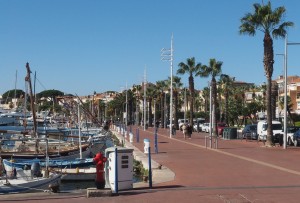 Returning to the Còte d’Azur from the west takes us to the lovely seaside fishing town of Bandol and its surrounding wine region.  As you can see from the map below, none of the wineries is actually in the immediate vicinity of Bandol.  Rather they are in semi-circular area up in the hills, encompassing the villages of Le Castellet, La Cadière d’Azur, Le Plan du Castellet, and Saint-Cyr-sur-Mer 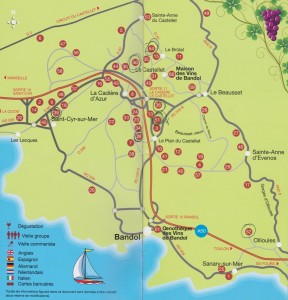 Some of the top wineries to visit are Domaine Tempier (primus inter pares), Domaine de la Suffrène, Domaine de Terrebrune, Domaine de la Tour du Bon, Domaine Pieracci, and Domaine Lafran-Veyrolles.  We also enjoyed Château Romassan because of memories of a previous trip visiting another of Domaine Ott‘s properties.  After quenching your thirst, enjoy some fine fresh seafood at the restaurant l’Auberge du Port by the quai in Bandol.  A great place to stay in the area is the Hostellerie Berard in La Cadière d’Azur, seen below during market day.  On the right below is the hilltop village itself as seen from Château Romassan. 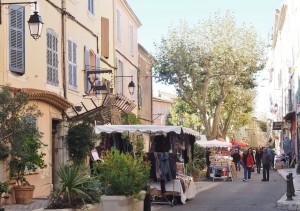 The daytime temperature in Provence averaged around 20C or more (~70F) while we were there in October, so go and enjoy fine wine, fine food, and fine weather, along with magnificent classical sites.